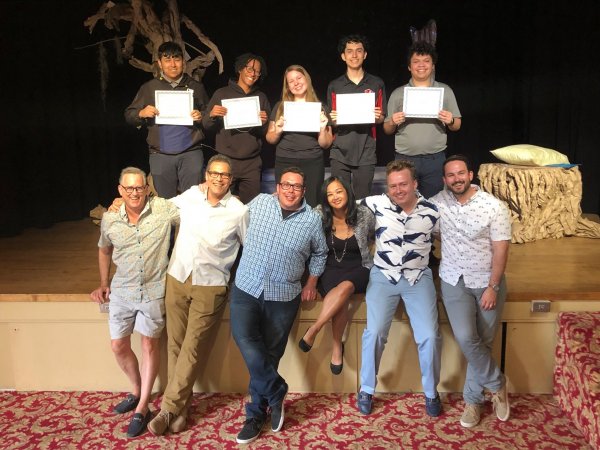 As Desert Ensemble Theatre (DET) celebrates its 11th season, the reopening of live theatre in the community, and a move to a new venue, it is also receiving a $25,000 Coachella Valley Spotlight grant from the H.N. and Frances C. Berger Foundation. The grant will help support the nonprofit organization’s remodeling effort.

“The Berger Foundation grant is coming at a perfect time,” said Shawn Abramowitz, Executive Director of DET. “This hand up is going to provide much needed stability and capacity building as DET transitions to a new venue.”

In search of a more permanent home, DET partnered with the Palm Springs Cultural Center (PSCC). The nonprofit facility currently houses three movie theatres, a restaurant, a lounge and a snack bar. With the help of the Coachella Valley Spotlight grant, one of the movie theatres is being transformed into a live performance space. DET is using sound and lighting equipment it already owned, plus purchasing new lighting instruments and additional A/V equipment. During a projected two-year conversion project, DET and PSCC will also add wing space and performer dressing rooms.

“We know that local theatre has faced a lot of challenges in the last two years,” said Catharine Reed, Vice President of Charitable Programs for the H.N. and Frances C. Berger Foundation. “Through this time, DET has persevered and even made a major change in order to continue its mission to support the creative visions of local theatre artists.”

DET is a repertory company that typically runs four productions per season, December-April, plus hosts an annual concert benefit and at least one staged reading annually. Committed to theatre education, DET offers in-depth mentoring and practical professional training to high school interns and awards competitive scholarships to several of its students each year.

Through the Coachella Valley Spotlight partnership with the H.N. and Frances C. Berger Foundation and News Channel 3, DET was featured on News Channel 3 programming, in public service announcements and on kesq.com throughout February. DET has two shows remaining this season: Salty, February 18-27 and All This Intimacy, March 25-April 3. Desert Ensemble Theatre is located at the Palm Springs Cultural Center, 2300 E. Baristo Road, Palm Springs. For information visit www.desertensembletheatre.org or call 760-565-2476.